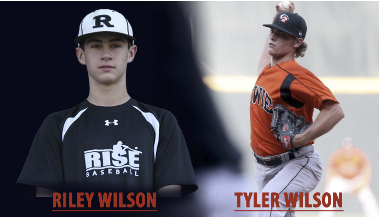 Former RISE Baseball player Tyler has been making the headlines after his impressive career at UVA and being drafted in the 10th round by the Orioles. Tyler has continued to impress with a 7-4 record for the Bowies in 2013. Tyler’s most recent success has placed him on the Baltimore Orioles Top 20 List for 2013 (#13 out of 20).

As older brother Tyler continues to grow on the prospect list; Riley Wilson looks to write his own history at UVA. Riley has committed to the Cavilers, but continues to impress on the field and off the field as he has proven to be on of the hardest working player at RISE Baseball. Many players and fans of Riley would agree when I say “he truly deserved the opportunity to write in the history books of UVA”.

Riley Wilson has made the drive up I-64 to the University of Virginia at least 100 times. For four years, he and his family attended baseball games at Davenport Field while older brother Tyler pitched for the Cavaliers. Most days, they’d make the trip not even knowing if Tyler, who pitched out of the bullpen for three seasons, would see any action.

Having visited Charlottesville so often, Riley got comfortable with the atmosphere, the coaching staff and the school in general. Earlier this summer, the rising senior at Cosby committed to spending his college years at Virginia.

“Growing up, having Tyler there, I was always the kid who was running around the stadium all the time, chasing foul balls,” Riley said. “Having him there for four years just made my decision a whole lot easier.”